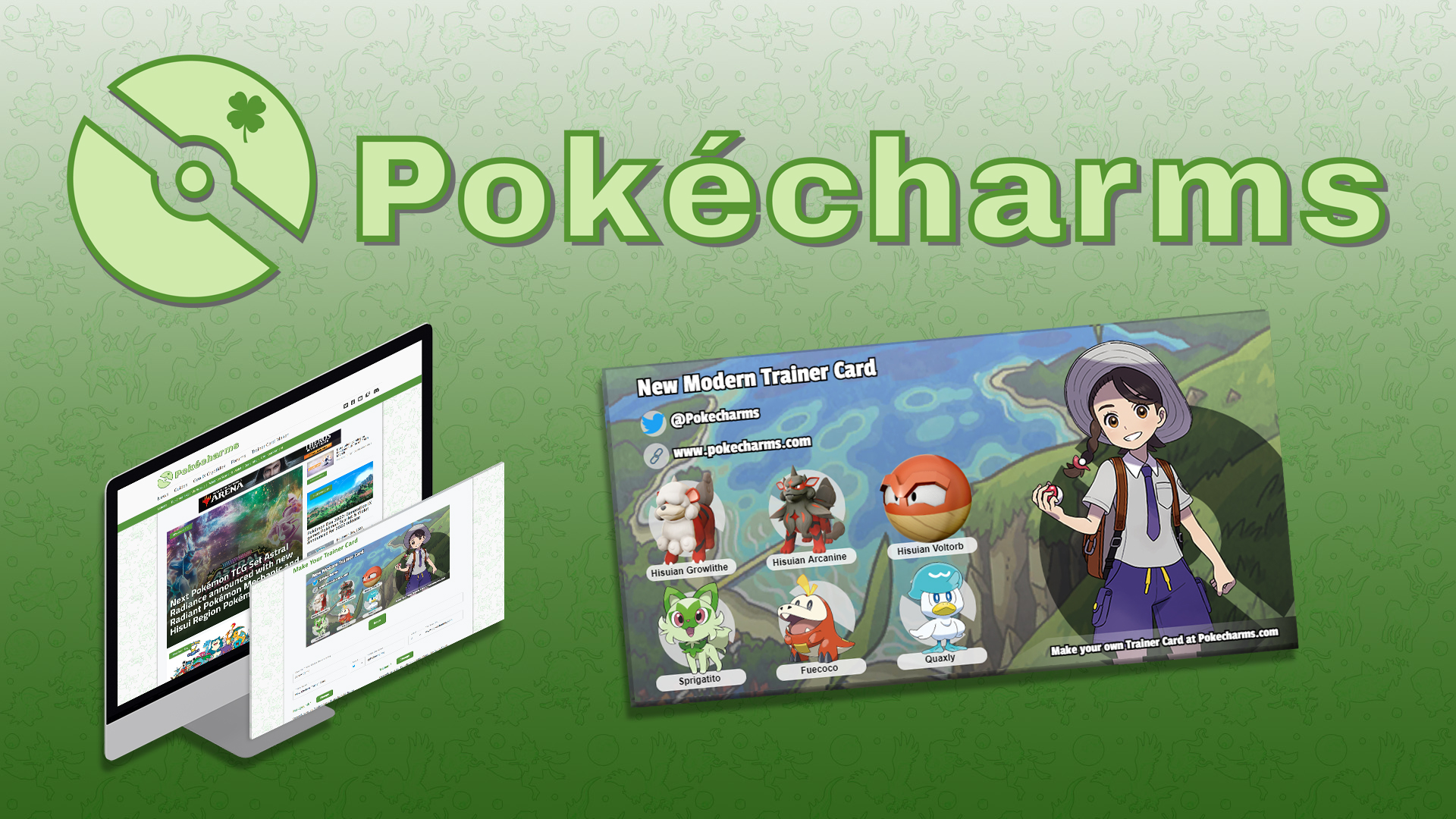 It’s been a long, long time coming – in fact it’s almost an entire year since we first announced some of these updates last Pokécharms Day – but on the 17th March (next Thursday) we’ll finally be launching the result of months and months of work over years with a brand new Pokécharms rebuilt from the ground up.

As we discussed last March, we’ve had a significant technical hurdle to overcome in recent years: our tight integration into our Xenforo powered forums, while it had certain advantages for connecting those to our users’ accounts, not only made the features of the site harder to update but made it impossible to upgrade the forums themselves to the latest version of Xenforo as none of those features would be compatible without a complete rewrite.

With that in mind we’ve had no choice but to completely re-evaluate and rebuild the site from the ground up, so that’s exactly what we’ve done. Every single aspect of the site going live next week is completely brand new, and more to the point, developed with modern tools and standards in mind specifically to allow us to continue developing the site with even more features from here on out.

That completely clean break does unfortunately bring with it a few downsides by necessity, though we’re very happy with the positives we have right now and look forward to adding even more in the future. But, before we get into the good news, we’ll need to break the one real piece of bad news first: the Creative Corner feature will be discontinued as of next week.

While we’ve been able to develop entire new solutions for the rest of the site’s current content, the Creative Corner is such a complicated beast that it would more than double the already extensive development time we’ve already had if we were to completely remake it and we simply don’t have the time and resources to do so ahead of this much-needed relaunch.

We’ll be keeping the Creative Corner’s features in mind in the future as we continue to grow and develop the site post-relaunch, but for now we will be asking everyone to post their latest works of art and writing in the main forums instead, with the Pit of Creativity section being renamed to the new Creative Corner and the forums within it being reworked to suit.

In the meantime, the current version of the site as you see it right now will remain online (under a new URL we will share next week, and without the ability to log in or post anything new) so all existing Creative Corner content will remain online for the short term future. We’ll eventually take this down, so it won’t be available forever, but everyone will have ample time to archive their own content and to post it onto the forums instead.

We appreciate and thank everyone for using the Corner over the last 6 or so years and can only apologise for any disappointment people might have for it going away for the time being, but we hope the rest of the good news will help take a bit of the sting out of things.

We’re making a big push into enhancing our original content, including our news coverage, with this relaunch and step one of that is definitely our new, much cleaner and easier to use, home page.

Alongside the news, we’ll also be introducing written (and later, we plan to include video) guides for all the major Pokémon releases to help answer any questions or solve any issues you have in playing them. Not to mention our more long form written content in the form of reviews, opinion pieces and feature articles.

We’ll also be covering all of the Scarlet and Violet news and new Pokémon in our best ever Cryptidex and keeping track of live Mystery Gift events and distributions in a way that can help ensure you never miss one ever again. And that’s just the beginning – we’ve got big plans for even more original content, including video content, more custom developed web app features and a return to Twitch Livestreaming.

As well as complete support for making our classic Trainer Cards with not only all existing assets, but also a long-awaited update to add the remaining Sword and Shield expansion pass Pokémon, we’ll also be launching a brand new modern style of card designed specifically around sharing your card on Social Media and Discord – as well as still generating an image you can download and upload anywhere else you like.

These new Modern cards will use a huge range of Pokémon assets, from full sprites, to in-game Pokémon models to full official artwork – which will also mean that from now on, as soon as a new Pokémon is announced, you’ll also be able to select it in the new Trainer Card Maker! No more waiting months (or forever) for updates – in fact, when the new TCM launches, every single Generation 8 AND 9 Pokémon will be available to add to your Modern style cards.

The new Modern style also allows for a couple of extra text fields to share your social media handles alongside your Nintendo Switch friend code if you wish.

Both the classic Legacy style and the new Modern style of cards can also be added to Streamlabs/OBS as an HTML Widget overlay using a unique link generated when you save your card. This widget will live-update (with about a 30s delay) with any changes you save on your card, so you can easily add your Trainer Card to your live streams and keep it up-to-date as you play through your game. Stay tuned for a more in-depth explanation of how to do that, as well as to see it in action in our own upcoming streams!

We will be constantly adding to, developing and improving the new TCM and expect to add even more new types of cards and even ways to generate them, such as a Twitch-specific card style and interface and even a Discord bot. So keep them peeled for more and more to come from the new TCM as we set about generating the next six million cards for you!

At the heart of all of this was very much the fact that we were in sore need of upgrading our forums software to the latest major version. As well as being significantly more secure, protecting your data as much as possible and hopefully killing off the plague of spambots we’ve been seeing wash upon our shores for years, Xenforo 2 also brings with it a series of new features that should make using the forums better than ever, including:

Alongside updates to the forums, we’ll also be improving our connection to our community with a brand new Discord server open to all. We’re very aware of the relatively low activity on the forums in recent years and the reality is that most of the discussion that would once have taken place there is now happening in real time on Discord in most cases instead.

We want to be able to continue those conversations with all of you, so we’d like to invite you all to join us on our own community Discord server where hopefully we can all make plenty of new connections and friendships.

We’re opening up the server right now ahead of our big relaunch next week, so we look forward to greeting as many of you as possible! You can join using this invite link:

And a lot more to come

This is just scratching the surface of what this relaunch brings with it. We are, effectively, launching an entirely new website next week and we’ll be continuing to build and develop it even further from then on. After spending every spare minute going to be able to get this far, our next step is to begin enjoying what we’ve built and get to work on using it to continue to expand and grow.

Our official birthday on Pokécharms Day next year will be our twentieth. We’ve been a bit stuck in the mud for the past few years of those two decades as we’ve had to do all of this work first and foremost at the expense of almost everything else, but we’re looking forward to a renewed ability to keep working on the site and be very well prepared for the next twenty years.