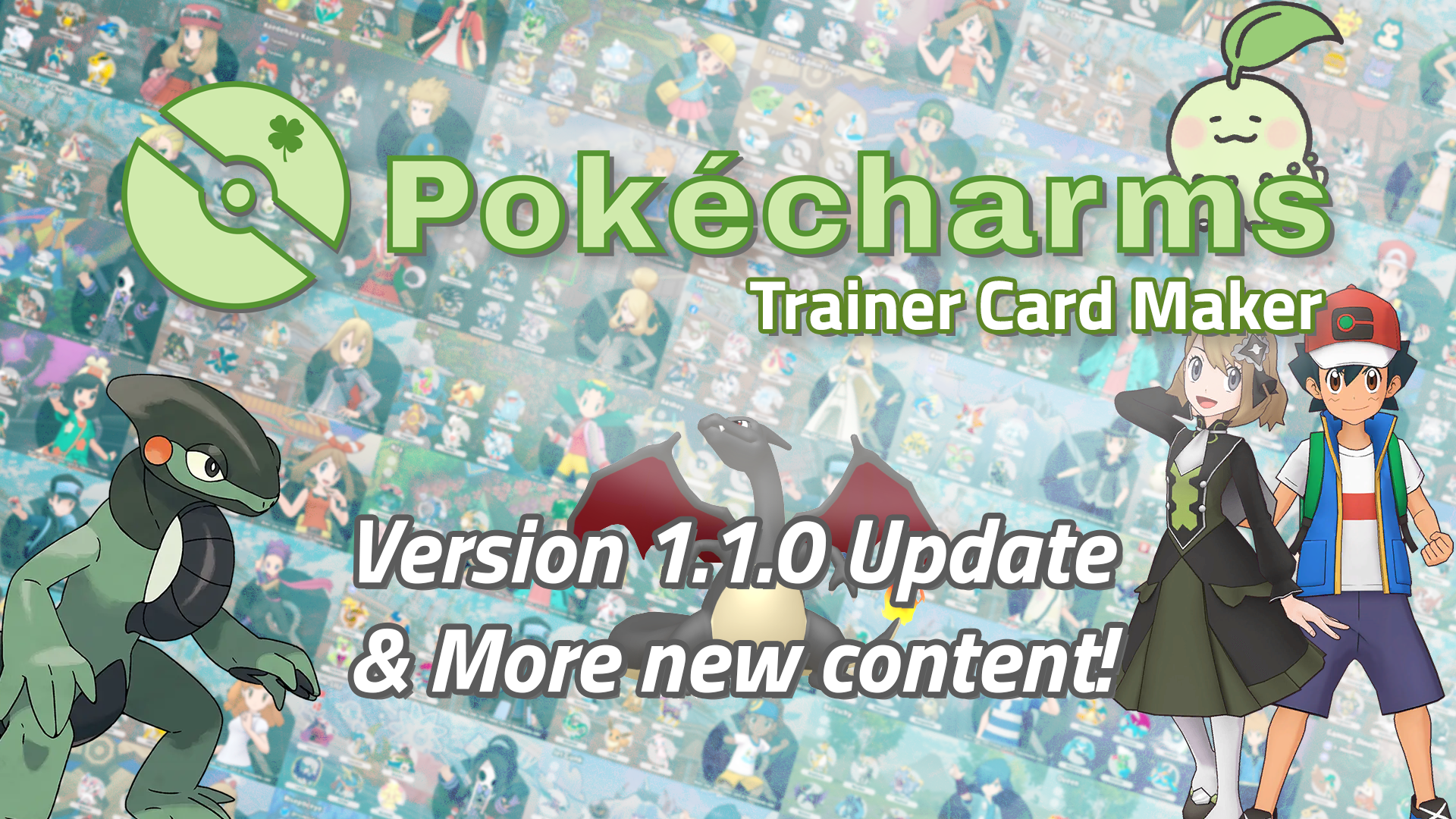 The first major feature update to our newly remade Trainer Card Maker is launching today, with version 1.1.0 of the brand new iteration bringing with it the long-awaited return of Shiny Pokémon as well as dozens more Trainers, even more delightful Pokémon Smile assets, the literally just announced new Pokémon Cyclizar and a few other fixes and improvements.

We’ve also finally been able to include the additional assets for those Pokémon that had different male and female appearances, as well as the shiny versions of both! For all you female Frillish and Jellicent fans out there, we thank you for your patience!

Over 70 new trainers have been added from Pokémon Masters alone, including the one and only Ash Ketchum himself (with a new background to boot!). But this isn’t even the biggest news! We’ve completely overhauled our Trainer selection on the Modern Trainer Card to make it easier to find your favourite character by allowing you to select the character first and show any and all assets we have for them!

We already have over two hundred characters to choose from, and we’ll continue to add more and more as the months go by. If your favourite isn’t here yet, just let us know by getting in touch on Twitter, on our forums, or in our Discord and we’ll be sure to make sure they go to the top of the list!

As well as adding the just-announced Cyclizar and all the new shiny and gender forms, we’ve also added all 100 of the Generation II Pokémon Smile assets! Ludicolo, Mime Jr and Dedenne have also made appearances in the game and have made their way into the Trainer Card Maker too!

In future feature updates we’ll have even more new styles to choose from too, so please look forward to that in the coming weeks and months.

The full changelog is below, which includes a few other additional improvements and fixes we’ve included in this version:

We’ve also recently underwent some backend maintenance and improvements that should improve overall performance of the Trainer Card Maker under heavy load as well as a recent update that improved the experience on mobile devices.

The next feature update is already in the works and hopefully will be along a lot sooner than this one was. Apologies for the wait! We’d hoped to finish this one up a couple months ago but a few other ducks had to fall into place first, including last week’s necessary maintenance to update the backend.

We’ll discuss a little more about what’s coming in the next feature update soon but one thing we’d like to announce our commitment to before the release of Scarlet & Violet is that your Trainer Cards will be able to show the following along with your Pokémon:

We’ll also have many more content updates to come, including one for every piece of relevant Scarlet & Violet news as quickly as possible after the reveal! Make sure to keep checking back with us for more and to follow us on Twitter for all of our updates.