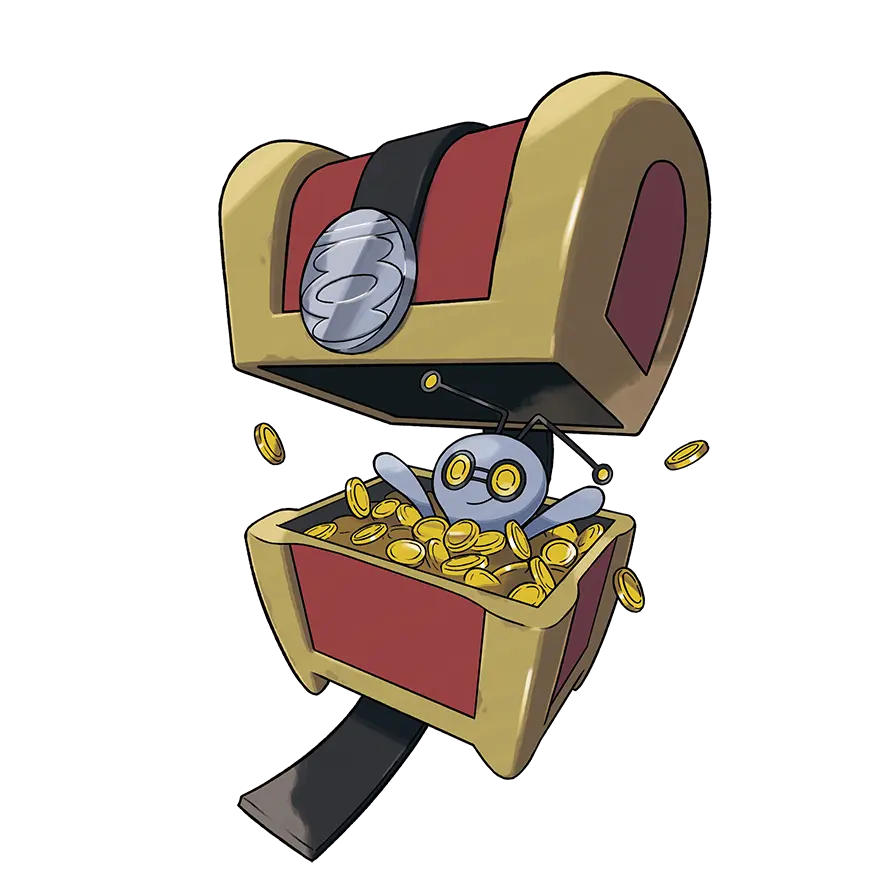 After mysteriously appearing over the weekend in Pokémon Go, and a website tease featuring a chest filling up with 999 golden coins, the latest new Pokémon from Pokémon Scarlet & Violet has been revealed as the ghost type Gimmighoul. A Mimic-like Pokémon with two very different forms.

Gimmighoul’s main form is it’s Chest Form. In this form, it hides within a sturdy treasure chest, providing it with a solid defense, but heavily reducing it’s speed. These treasure chests are reportedly commonly mistaken for antiques and sold in antique stores.

Gimmighoul can sense when a person or Pokémon is nearby and ambush them, using it’s Ghost type powers to control it’s target and force them to collect coins for it. In it’s reveal trailer, we’re told a fairy tale of Gimmighoul forcing a young girl to collect 999 coins for it before it sets her free. The website teaser running for the last day has also effectively told that same story – with Gimmighoul slowly revealing itself up until it’s chest was filled with 999 coins and these new trailers dropped.

It’s Roaming Form, meanwhile, loses the treasure chest entirely and carries a single gold coin along with it on it’s back. It’s this form that has been appearing in Pokémon Go, but it is reportedly a fairly common sight in the Paldea Region – albeit one you might need to pay close attention to given Gimmighoul’s diminutive stature. This form’s speed and agility is so much greater that it’s reported that no trainer in the Paldea Region has ever actually caught one. It’s unclear if this will extend to you as a player – but it does seem that you will be able to get both forms in-game one way or another.

Meanwhile, the Pokémon Go side of this event has finished up with a reveal that Scarlet & Violet will be able to connect with Pokémon Go at some point next year, bringing an opportunity to catch the Roaming Form Gimmighoul within Pokémon Go when it happens.

It’s specifically noted that you will not be able to directly send Pokémon from Pokémon Go to Pokémon Scarlet & Violet, but it’s not unlikely that you will be able to continue to send Pokémon to Pokémon HOME and then transfer them into Scarlet & Violet as you currently can for compatible Pokémon in Sword & Shield, Legends Arceus and Brilliant Diamond & Shining Pearl.

While there’s currently been no specific news on when to expect connectivity with Pokémon HOME for Scarlet & Violet, it’s also likely a safe assumption that it will be the same connectivity update they’re referring to for Pokémon Go in 2023.

As well as an in-depth look at the mythos surrounding Gimmighoul, a gameplay trailer showing both forms in action in Scarlet & Violet has also been released. It remains to be seen whether Gimmighoul is, in fact, the 1000th Pokémon in the National PokéDex, as some have speculated since the chest tease website went live yesterday.

You can also now add Gimmighoul to your Trainer Cards with our Modern style Trainer Card Maker. Don’t forget to check out our Cryptidex page on it for the full details about the new Pokémon too!